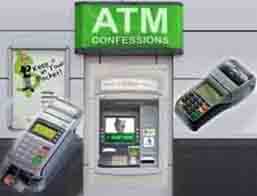 Iya Mosira is a trader at Bodija market in Ibadan. He gets his supplies of cosmetics, her article of trade, at the trade fare complex in Lagos. Travelling to Lagos at least twice every week for restocking, her son Mosira thought it wise to counsel her mother to open a bank account. Mosira explained to her mother that it is the safest thing to do as this would tackle the fear of armed robbers and muggers that sometimes litter the road and waylay traders.

Iya Mosira always kept her money in her purse, which she wears in her waist protected by her Ankara wrapper. She had always worn it that way and for the past ten years that she had been a trader, which was how she protected her money and transported it to market.
So when Mosira came up with the suggestion of bank account, she was skeptical. How would she access her money whenever she wanted it? If she keeps the money in a bank at Ibadan, how will she access it when she gets to Lagos? Will the bank always give her the amount of money she needs at every point in time, without any stories? These and more were her concerns.

But Mosira had it all explained, how banking transactions worked. If she puts the money in the bank at Ibandan, it would only take her a few minutes to withdraw any amount she needs for the day at the same bank in Lagos. All she needed to do was present a paper, a teller, which Mosira would have completed with the required details, at the bank and she would be given the money.
She still had her reservations with the entire process but Mosira was her son, he would gain nothing if she lost her trading capital. So she bought the idea and with the help of Mosira opened a savings account with one of the new generation banks at Ibadan.

In a forth night, Iya Mosira was at a branch of the bank at the trade fare complex to withdraw the money she needed to purchase her goods. As Mosira had directed, she presented her withdrawal slip that Mosira had filled out to the cashier. The cashier, a young man, collected it and continued with whatever he was doing. After a few minutes, Iya Mosira demanded for the money but the young cashier stood up and apologized to her that due to network problem she may have to come back in an hour’s time.

Iya Mosira lost her temper immediately. She became so agitated and shouted on top of her voice demanding for her money. All attempts made by the cashier to calm her down and appeal to her that her money was still safe could not assuage her anger or make her suspicion of fraud to disappear. When her cries and howling persisted, the security personnel came to pull her out of the bank but that didn’t work as she threatened to kill herself right there unless the bank gives her money.

“Kilonje network? (What is network?). You must give me my money today,” She shouted over and over again.

At the end, it took the combined efforts of the branch manager, the customer service personnel, the security and even some of the customers who were also waiting to convince her to exercise a little patience for the network to return so she could collect her money. As providence may have it, network did become available again after about twenty minutes and she was paid but beyond that, she insisted on collecting every kobo she had in the account; thereby closing the account she opened barely a month after.

People like Iya Mosira make up at least, 65 percent of the Nigeria’s population. 46.3 percent of Nigeria’s adult population is unbanked, according to available statistics. This means that they have been excluded from the modern and formal financial services. This places Nigeria behind South Africa, Kenya and Botswana that have 26.6 percent, 32.7 percent and 33.0 percent respectively.
So it was as a result of this trend that the central bank of Nigeria, CBN under the former governor, Mallam Sanusi Lamido Sanusi came up with the idea of a cashless society through the cashless policy.

The first phase of the policy was unveiled in Lagos on the 1st of June, 2012 and saw massive deployment of PoS machines across Lagos. It was expected that traders like Iya Mosira will now employ the PoS to facilitate transaction and by so doing help reduce the level of physical cash in the system; and further curb the problem of insecurity and other menace associated with cash handling.
But as the story above illustrated, two basic challenges clearly confront the cashless policy. First, in a society where there are more people like Iya Mosira, who have very low level of basic literacy are more than those with high level of literacy, it is very unlikely that automating financial transaction will bring them into the financial system. It would rather shut them out.
Second, Nigeria’s level of internet penetrations, although growing at a considerable rate of 28 percent, is not sufficient yet to sustain a reliable e-based financial system.

DigitalLagos’ investigation within the Lagos metropolis revealed that most traders who have PoS hardly use it due to network challenges.
“Even those who want to pay through PoS can’t because of network problem. The thing hardly goes through,’ said Ifeanyi Obi who runs a pharmaceutical store.

Some others who spoke to DigitalLagos on this matter said the cashless policy though a good idea, should be allowed to evolve naturally as the infrastructure required to make it effective has yet to be put in place.

Ediri Thomas is a business Development Manager with a financial services firm, he said, “The cashless policy undoubtedly is a good initiative, but given the kind of society we are, it is going to take time before it picks. Most of the people are illiterate and the infrastructure needed to run cashless society is very limited. So I think instead of CBN putting any kind of sanctions to encourage the cashless society, it should rather put more incentives in place to drive the initiative.”

Maxwell Quadri was more pessimistic about the policy. He said it was unlikely going to succeed given the kind of society Nigeria is.
According to him, “This cashless policy is a charade. In fact it failed before it even started. This is because today, most PoS can’t process payment successfully, the ATMs can’t conclude either inter-bank or intra-bank fund transfers successfully, so what are we talking about cashless policy? Plus the fact that the people are tactile, we love to feel and touch our cash; so most people see themselves stranded even with card, unless they walk into a banking hall.

“More so, the CBN appears to be speaking with both sides of its mouth. How can they be campaigning for financial inclusion and at the same time talking about automating transaction processes? People have to understand why their money must be in the bank first before talking about electronic process of transaction.”

Following the kick off of the policy in Lagos, it was further extended to other states like Abia, Anambra, Ogun, Kano and the FCT. These areas have apparently struggled with the policy. And as it went nationwide last month, analyst argue that it remains to be seen if the initiative will bring any form of relief or become a burden to the finance sector.