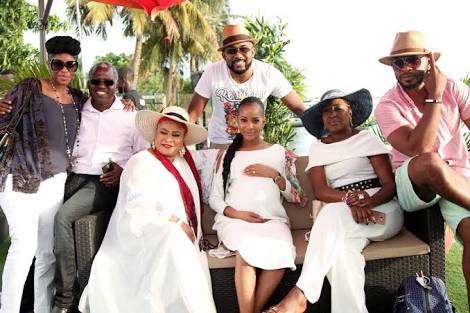 While movie lovers are yet to get over The Wedding Party 1, over the weekend, the grand premiere of one of the most anticipated movies of the year – The Wedding Party 2 took place. The movie is a sequel to The Wedding party 1, became more popular when the lead characters, Nigerian singer, Banky W, and Nollywood actress, Adesua Etomi, who marry in the movie, later marry in real life.

While emphasis was on Dozie (Banky W) and Dunni(Adesua Etomi) in part one, the sequel focuses on Deedee (Daniella Down) finding her Nigerian prince-charming. Deedee and Nonso(Enyinna Nwigwe) met at Dunni and Dozie’s wedding which led to a 7-month-old relationship that continued in part two. Wedding Party 2 comes with new twists. This time around, Deedee became love-struck and too surprised, only to conclude that Nonso proposed to her because actually, the ring was not for her. It turned out that there was going to be a bi-racial marriage between the Onwuka’s and the Winston’s. The announcement of their wedding plans came as a shock Chief Onwuka(RMD), Nonso’s father and even his mother, Lady Obianuju (Ireti Doyle), who at some point, doubted her son’s decision and state of mind.

However, the intending couple convinced their parents but Nonso’s aunt, Adaku(Patience Ozokwor) was a hard nut to crack, given that she was more a traditional woman that believing in her cultural beliefs. According to her, the Onwuka lineage would be robbed off its glory after it accepts a white woman to their family. Amidst the drama that ensued between both families, lover boy Nonso insists on getting married to his belle, Deedee. His beau, Deedee also had its own fair share of challenges. She had to win her father who boasted of his royal lineage. She was against her marrying a non-royal Nigerian man.

However, both families have no other option. But to come to terms with great children’s decision so they can marry. The traditional wedding takes place in Nigeria and involves the Winston family flying down. Things turn sour when they break the tradition. This happened to be the perfect opportunity for Adaku to voice her grievances. It turned out that the traditional wedding which started on a happy note. It turned out to be a flop with both families backing out.

However, people had hoped from the white wedding. It turned out it was going to be a destination wedding in the city of Dubai. Everyone gets their traveling bags and heads to Dubai. It is going to be the most dramatic wedding party we have ever witnessed. Wedding Party 2 has a storyline that is sure to leave viewers reeling with laughter. And particularly with stellar appearance of comedians like Seyi Law, Chigul, Elenu amongst others. Fans would thrill as they see the consequences of bi-racial marriages. They catch up with their favourite movie stars. Wedding Party 2 would officially hit cinemas as of 15th December 2017. Its selling will go just like part one. Would there be The Wedding party 3? Only time would tell.

Visit us for more movie reviews.