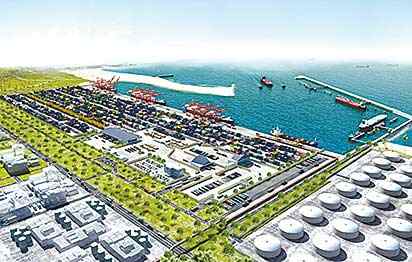 The government of Lagos state and other stakeholders in the multi-billion naira Lekki deep seaport are disagreeing over the ownership and operations of the project, thus putting the takeoff of the seaport project scheduled to take off in 2017.

The project is sited off the ultra-modern Lekki Epe Expressway, Lagos and the key investors – the Federal Government, Lagos State Government and a private investor, Singapore-based Tolaram group, couldn’t reach conclusions on major decisions that will facilitate the smooth take off of the deep seaport.

THISDAY reported that the three prime investors in the deep seaports are not on the same page in the way and manner the project should be executed and operated and the disagreement has robbed off negatively on the scheduled date for the formal unveiling of the deep seaport.

It said besides the row on the actual cost of the $1.5 billion deep seaport project, the prime movers of the project are yet to agree real value of their equities in facility.

While the three prime investors are expected to own equities of 20 per cent, 18.5 per cent and 61 per cent respectively, there are fears in certain quarters that mutual suspicion of one another has dogged every further step for the deep seaport.

Early this year, NPA told the Senate Committee on Marine Transport that “Some amount was appropriated in the 2013 budget, but before NPA can commit funds, we have to be sure of the availability of their own fund and the verification of claims that they have injected $60 million and they have a balance of $152 million on ground.”