Wearable technology has enjoyed its rise to prominence in the fitness space with heart rate monitors and smart watches.
This industry, however, is poised to move into the multi-billion dollar a year stratosphere with a significantly extended
reach.

Seeing a runner or cyclist training is a common sight, seeing them check their heart rate status using a wrist watch style
monitor is becoming even more common. While it is a straightforward and successful application of wearable technology, it
will soon be joined by a number of others that are more focused on the concerns of modern living.

While this platform technology has application in the fitness space it is also capable of much more. The device displays an 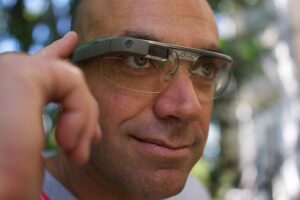 overlay to the user’s visual field augmenting what the user sees. It can be particularly useful for navigating in a city
environment by overlaying a map similar to google maps in the display. An onboard microphone system facilitates voice
activated searches of the Google database results visually displayed. Let’s not forget hands free video and photo
capability that captures what the user is looking at.

A future for this technology was recently revealed by Augmenta Ltd, a Finland based company whose mission is to create a
new gesture vocabulary to allow the glass visual interface to be controlled by motions a user programs. Augmenta’s
technology will allow the user to control other devices, for example a stereo, by projecting images like slider bars, which
in turn can be used to change its volume.

To get away from the tech-look of many wearable technologies, stylish designs from a company called Cuff have arrived on

the scene. While this designer product line is capable of fitness tracking, it can also be used to track a child, or
teenager who has stayed out too late, or broadcast your whereabouts, which may literally be a life saver in an emergency
situation. The jewelry line comes with options that can tastefully blend with any ensemble.

A glimpse of the future of wearable tech is seen in Disney’s MyMagic+ ticketing system, composed of the MagicBand. This
wrist based band acts as a guest’s hotel key, theme park ticket, payment method for concessions (tied electronically to the
guests credit card). Reminiscent of the Cuff technology, the MagicBand is also trackable within the confines of the park
allowing the location of any patron, or child that may get lost.

The Future of Wearable Tech

Wearable tech is in its infancy and as it grows to maturity it is being examined for other uses. One in particular holds
the greatest promise toward propelling this technology space into a multi-billion dollar industry, though the benefit to
users may be a two edged sword. In a recent press release from Digital Journal, a substantive marketing study revealed that
wearable tech may be used for advertising market research. Devices that can detect behaviors, of the users including
movements, vital signs may be the next frontier.

For example if you experience something exciting that increases your heart rate, while your skin breaks out in a light
sweat, this can be sensed by some wearable tech that allows a marketer to determine if what he was selling is a success.
Improvements to products could be planned based on the customer’s physiologic reactions. Is this an overly personal glimpse
into a customer’s physiology, with the potential for abuse? It remains to be seen, but it’s an interesting question to
think about as things move forward for Wearable tech.

The root cause behind every business operation is revenue generation and profit earning. In order to earn maximum profits,...