We’ve mentioned hashtags before, emphasising how valuable they can be, whether it’s to help increase the reach of your tweet, find content that’s interesting or connect you with like-minded individuals. Here, we explain a little more about hashtags, how to use them and where you’ll find them handy.

If you’re just getting started with social media, hashtags might seem unnecessary and a little confusing. However, they’re now an important feature of most social networks and do have a wide range of benefits when used correctly. On Twitter the ‘hashtag’ or ‘pound sign’ turns any word or group of words that directly follow it (without spaces) into a searchable link. This means you to organise content, track discussions and join conversations surrounding those keywords. For example, if you wanted to tweet about The Apprentice, you could include #TheApprentice in your post. If you click on a hashtag you will see all tweets that mention that subject as they’re being posted.

Although hashtags started on Twitter, they’re now in use across many other social networks, including Instagram, Facebook, Google Plus and Pinterest. Hashtags weren’t officially in use when Twitter began, but people started using them to group tweets together to help update others on certain topics. If you’re interested in finding out more about how their use started, take a look at this article on the History of Hashtags.

HOW TO USE A HASHTAG
Using a hashtag in a social post is as simple as adding the ‘#’ sign before a single word or phrase without spaces or punctuation. So, if you include apostrophes or hyphens, your hashtag will be cut short (numbers are okay)!

Don’t string too many words together with a single hashtag – it can be hard for others to read! Also remember it’s still counted in your 140 character limit on Twitter.
Keep in mind that if you tweet with a hashtag on a public account, anyone who does a search for that hashtag may find your tweet.
Don’t over-tag a single tweet. If you hashtag every single word, it’ll make your tweet look like spam.
Use hashtags only on tweets relevant to the topic. Using a popular hashtag on an unrelated post is generally not good social media etiquette.

WHERE CAN I USE HASHTAGS?
Twitter: Twitter is the birthplace of modern hashtag usage — hashtags usage here is more versatile than other sites. Sometimes they will be added for entertainment purposes, for example #BadDayAtTheOffice or #JustKidding. Twitter hashtags are mainly used to denote specific topics of conversation; the “Trends” sidebar of your Twitter feed will show you popular hashtags currently being used and topics being discussed.

When you search for a hashtag on Twitter, there are several ways to filter the results. The “Top” option displays the most relevant and popular posts, including those from users you don’t follow. “All” shows you every tweet that uses the specific hashtag in real time, “People you follow” will only display results from users you are following and “Near you” will only display tweets from people near to you geographically.

Facebook: Facebook introduced hashtags back in 2013, however it has not taken off on the platform in the same way as other channels. It works in a similar way to Twitter, creating a clickable link that groups all those discussing a topic together. As with Twitter, their ‘trending’ sidebar lists popular trends and topics being talked about on Facebook.

Instagram: Hashtags that complement the photo can be added to Instagram posts to help maximise the reach of the photo. If your account is public, it can help you attract new followers if people are interested in the kind of images you share. Likewise, it can help open up a whole lot of content that you might be interested in following. Hashtags that Vine used hashtags in the same way.

Pinterest: Hashtags on Pinterest can be used to search for content. if you click on the hashtag in a pin description you’ll see all results containing that hashtag, plus pins with the same word or phrase in the description.

Google Plus: When you click on a hashtag in Google+, the search results will include the original hashtag as well as posts with similar tags and keywords. Google search results display on the left side of the page, while hashtag results from within Google+ appear on the right. Google also gives you the option to search within Facebook or Twitter. Google+ will add hashtags to content if they think that it is a relevant and popular keyword. You can always opt-out of this through Google+ if you’d like.

Tumblr: When you’re creating a post on your Tumblr page, you’ll see an area at the bottom asking you to add “tags.” When you start to type a tag for your post, Tumblr will automatically add a hashtag to the front of it. Hashtags included in the main body of a post are not transformed into links.

BEST PRACTICES
Twitter has a helpful list of best practices for using hashtags, but here are three things we think are important for you to consider:

Keep it short – Whether you’re creating a hashtag for an official event or adding one for entertainment value at the end of your post, aim to keep it short. The longer they are, the more confusing they are for others to read, and if you’re tweeting it’ll eat into your character limit. if for whatever reason you need to use a long hashtag, one way to make hashtags easier to read is to capitalise the start of each word

Keep it specific – If you’re looking to talk about a certain topic, being as specific as possible will mean your post is more likely to be seen by the right audience. For example, simply tagging individual words such as #sport or #rugby won’t necessarily be specific enough for your post to be seen by others talking about the Rugby World Cup (official hashtag #RWC2015).

Keep is simple – Try not to add too many hashtags to a single post. Adding too many can make your posts look like spam – try to limit it to a maximum of two or three on Twitter or Facebook, although a greater number are generally accepted on Instagram.

5 Reasons to be excited about the new MAC OS 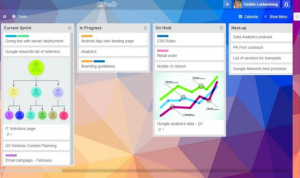 Efficient project managers are key to the success of any business – but do you need to hire one? With collaborative management...