What is Graphical User Interface?

Interacting with computers these days is really facilitated. We switch them on and what we see is a nice set of icons. Usually we are on a ‘click’ away from the desired action and the best part is that we can actually see what is happening. This great asset was firstly introduced about 30 years ago and today it’s known as GUI. GUI stands for ‘graphical user interface’. This is a program interface which uses icons, windows and menus which can be manipulated by a mouse. Let’s see how this happened!
The first concept for GUI dates back to 1945. Vannevar Bush, a scientist from the Massachusetts Institute of Technology presented in his article As We May Think, a new tool called Memex. The concept of Memex was to allow data storage on microfilm and make it easily accessible, programmable and linkable.
Five years later, in 1950, a Stanford University scientist named Douglas Engelbart was very impressed by Bush’s idea. He got inspired and 18 years later, in 1968, the result of his inspiration became a fact. The first mouse was presented at the Fall Joint Computer Conference in San Francisco. Called the X-Y Position Indicator, it was hosted in a small wooden box with wheels and when rolled around on a horizontal surface it was moving the cursor with it.
The first usable GUI actually appeared in 1974 and it was developed by the Xerox Corporation in their Xerox Palo Alto Research Centre (PARC). The GUI was implemented in their Alto computer but unfortunately the production cost for Alto was extremely high and it didn’t get a commercial success.
The real breakthrough came in 1984 when Steve Jobs presented his Apple Macintosh. This was the first machine in which GUI became commercially successful. It was literally spread among the developers and was adopted basically in all types of computers and in various kinds of products – from industrial and hi-tech to baby stuff.
Of course, Microsoft didn’t run much behind. In the period 1983 – 1987 they released two versions of Windows – Windows 1 and 2. GUI wasn’t very successful for those two but it was highly improved in 1995 when Windows 95 was launched.
From that moment on everyone started using the benefits of the progressive development of GUI.
The advantages of GUI are recognized by both Mac and Windows lovers.
If the GUI is well-designed, it will save your time and it will improve your user experience. GUI makes any computer operation much more intuitive, which automatically eases up the understanding and learning process for the program or app that you are using.
You can actually interact with the device. It doesn’t matter if it’s a tablet, a mobile phone, a toy or a PC. You can immediately see the result of your actions by visual feedback.
You also get the ability for multitasking. GUI allows you to simultaneously run a few programs or a few features of a single program.
All of the above are great assets for us but there is something more. By influencing the work on a whole generation of users GUI has become the standard in human-computer interaction. It brought to live a lot of new industries and new applications and it’s advancing more and more each day.
The challenge for GUI is to create a 3D space. Practically it will not make a great difference in the interaction speed, on the contrary – 3D programming requires more data space. Of course it will be fun but at some point it might even slow down the interaction process. The GUIs that are in use these days are mainly designed for 2D manipulation and it will take some time until the technology is optimized.
3D or not the main goal of GUI is to facilitate the users in their interaction with the device. The mission has been perfectly achieved by now so let’s see what the nearest future will bring. A lot of new cool features are coming on the way. Let’s hope that they will be ‘light and fresh’ to keep our attention long enough and to give us even more benefits! 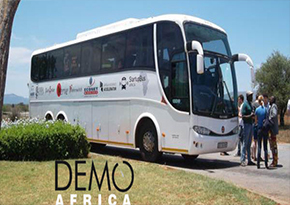 DEMO Africa just got better and more interesting after confirmation that the AMPION Venture Bus 2014 will land at the venue...