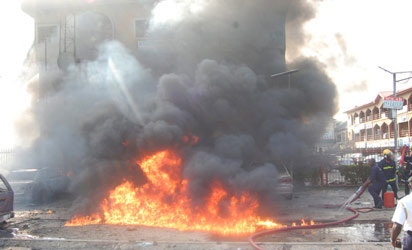 Within the last few decades, several countries in Africa like Egypt, Libya, Nigeria, Ghana, Angola and South Africa have made significant economic progress. This was as a result of relative peace and fair economic environment. Some of them attracted reasonable foreign investments, especially in the services sector thus, started to place them on the path of economic recovery. Some of them started making significant efforts to develop their local economies to enable them move most of their people from the bottom rung of life.

Since the end of colonial rule in Africa, many countries in the continent have continued to struggle for economic freedom. With overbearing poor population, various governments within the continent have taken several steps to enable them redeem their people from the clutches of poverty but unfortunately it had been one step forward, four steps backward. To a convincing extent it is becoming glaring that the problem of poverty in Africa can never be conquered. Despite the amount of resources, both human and natural, at the continent’s disposal, the continent and its people have remained a monumental butt of joke among the comity of nations.

Take for instance, Africa’s most populous country; Nigeria. It has witnessed violence perpetrated substantially by the notorious Islamic sect, Boko Haram for the best part of the past five years. And the scale is only growing as more bombs keep going off on a more regular basis and daylight abduction is carried out on a grander scale. The section of that country where the insurgency is rooted once had a thriving economy that has been brought to its knees at the moment, leaving the people more impoverished than ever. The violence has thrown the whole country into deep confusion and left government hugely distracted from pursuing• any sustained economic agenda.
Take a look at Egypt also, after the inferno of the Arab Spring spread to that Pharaoh’s nation and its president, Hosni Mubarak was toppled; the country has not known peace up until this moment. It has remained a sharply divided country, on religious and political lines, with intermittent violence that has left thousands dead and hundreds of people unlawfully incarcerated. There is no gainsaying it that its once thriving economy has nose-dived; and with many more dying in Democratic Republic of Congo, South Sudan and bombs going off in Kenya in an endless struggle for power and resource control, Africa has little hope of wriggling out of its economic bondage.

The truth is that Africa may never win its war on poverty with this scale of violence raging across its shores.
Why are Africans killing themselves? How long shall they continue to kill themselves in the name of tongue and foreign gods? Sometimes, they like to pass the buck to the colonial masters as they argue that they sowed the seed of discord that has divided them. But anyone who critically thinks would understand that such buck passing would never move the continent any inch towards its pursuit for economic freedom. It is now time for them to admit that the white man has come and gone. It is time to also admit that it will be high point of foolishness to keep watering the seed of discord planted by the white man in the continent in his bid to make the people governable, by continuing to kill each other. It is not until they admit these realities that the people of Africa will know peace.

African politicians should begin to understand that when they incite their own people to fight and kill each other on religious and political grounds, they are tightening the noose of poverty which is round the continent’s neck. They must understand that the more peace and mediation talks the continent hosts, the more economic power it loses to the so-called mediators. African politicians must refrain from inciting their people to violence in their quest for power and instead begin to pursue economic inclusion in order to reduce the inequality which is feeding the violence in the continent. The people themselves must also begin to place more premiums on human lives and stop patronising quick-witted politicians who only know how to torture submissive population, especially by looting national treasury.